Anthony “Showtime” Pettis is the future of MMA. He represents the new elite crop of MMA fighters, athletes who are complete mixed martial artists and who will lead the sport to new heights. He is in the same class as Ronda Rousey, Demetrious Johnson, TJ Dillashaw, Jose Aldo, Chris Weidman, Jon Jones, and Cain Velasquez. All these men (and women) represent the very best our sport has to offer, and they are also arguably the best fighters their respective divisions have ever witnessed. We are truly living in a golden age of MMA right now, and Anthony Pettis is one of this era’s brightest stars.

Showtime just has that star quality that not all fighters posses. I can’t think of a better way to put it other than he’s got swag. There is a certain confidence that a person has when he knows he’s the best and Anthony Pettis has that. His looks, fighting ability and charisma have helped land him major sponsorship deals with the likes of Reebok and Wheaties. He isn’t just all looks and charisma though, this man can fight.

Anthony has a very unique and dangerous MMA style. He is a lethal striker with proven knockout ability in both his hands and legs. He is also a deadly submission specialist who has been able to tap out legitimate black-belts with relative ease. He is absolutely dangerous in all aspects of the sport, and he is unique in the way that he can mix in some truly amazing techniques into his fights. Showtime (a very appropriate nickname by the way) is best known for his amazing “Showtime Kick” where he literally jumped off the cage like a ninja and kicked (then champion) Benson Henderson in the face (you can see the kick at :38 in the video). He is arguably the most creative striker in MMA today and it is just a pleasure to watch him perform inside the octagon.

Pettis started his MMA career in 2007 and he has a career record of 18-2 with 7 KO’s and 8 submissions. His only 2 loses were both controversial judges decisions against Bart Palaszewski in 2009 and Clay Guida in 2011. Many people feel he won both of those fights but in the end the judges disagreed leaving those two blemishes on his otherwise stellar record.

After compiling a 12-1 record at just 23 years of age Pettis earned a shot at the WEC Lightweight belt. In December of 2010 Showtime became the WEC 155lbs champion by defeating Benson Henderson in the WEC’s last event before merging with the UFC. After winning the belt Anthony was supposed to fight the UFC Champion to combine belts, but the Frankie Edgar vs Gray Maynard trilogy delayed his title shot. In order to stay active he took a fight against Clay Guida and ended up losing a controversial judges decision.

Following his loss to Guida, Pettis rebounded by winning 3 straight fights against top fighters Jeremy Stephens, #21 Joe Lauzon, and #4 Donald “Cowboy” Cerrone. During this run Pettis was finally able to show UFC fans some of his deadly finishing ability. He beat Joe Lauzon by landing a beautiful, head-kick knockout, and he defeated Cowboy Cerrone (an elite striker in his own right) with a scary, liver kick knockout.

This earned Anthony Pettis his long promised shot at the UFC Lightweight title against none other than Benson Henderson, the same man Pettis had previously beat to win the WEC Lightweight title. The first fight between these 2 men was a back and forth battle that went 5 rounds and was declared fight of the year back in 2010. Their second encounter couldn’t have been more different. It was a one sided affair, after landing some vicious body-kicks, Pettis was able to snatch Henderson’s arm and he forced him to tap out all in less than 5 minutes.

Pettis then went on to coach the 20th season of the Ultimate Fighter against Gilbert Melendez, who he then proceeded to beat in his 1st title defense at UFC 181. Pettis proved to be the clearly better fighter by rocking Melendez on the feet with punches and then chocking him out with a sleek guillotine choke in the second round, earning his first title defense at 155lbs.

Anthony Pettis is already the best lightweight fighter in the world, that much is a fact. Now he has to prove that he is the best fighter in lightweight history. He already has wins over the #4 (Cerrone), #5(Henderson), & #6(Melendez) ranked lightweights and he is about to face #3(Dos Anjos).

BJ Penn and Benson Henderson both hold the record for most title defenses in the lightweight division at 3. Currently, Pettis only has 1 title defense, but he’ll get the opportunity to get 1 more this Saturday when he faces #3 Rafael Dos Anjos @UFC185. Dos Anjos is a legitimate challenger that should prove to be a tough test for Pettis. If Pettis can defeat him it will only further cement his legacy as arguably the best lightweight fighter in MMA history, and maybe even the greatest fighter of all time. 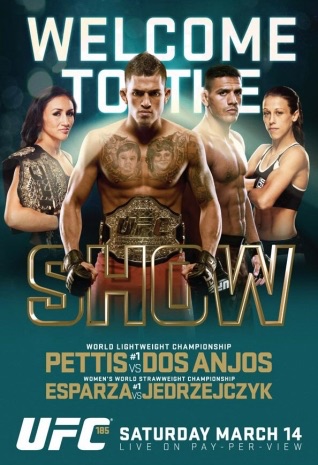 Be sure to watch Anthony Pettis make history this Saturday at UFC 185, only on pay per view.